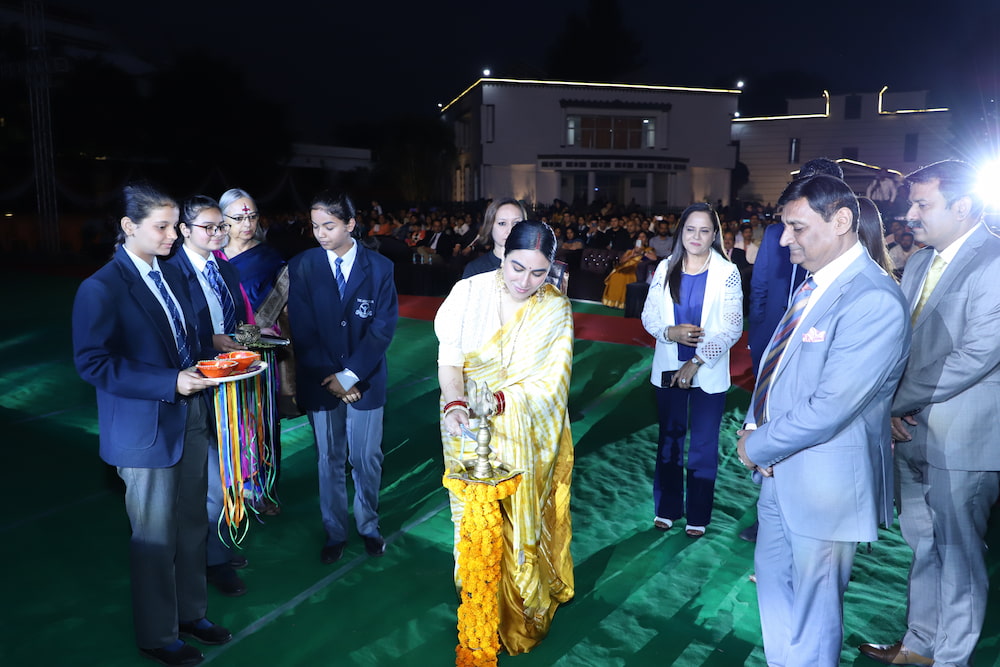 The Asian School, Dehradun Celebrated its 23 rd Founders Day with fervor and enthusiasm. The
verdant ‘Asian Acers’ once again wore a festive look as the parents and guests thronged the venue
to see their wards’ poised presentations on stage. Everything looked colourful and the
environment was full of verve, mirth and gaiety
The function commenced with the lighting of the ceremonial lamp by the
Chief Guest, Ms. Priya Malik, Actor, Poetess and TEDx Speaker.
This was followed by the welcome address by the President, Mr. Amarjeet Singh who
congratulated the students on their success in all spheres and thanked the parents who placed
their faith in the school to better the future of their children.
The Director, Mr. Gaganjyot Juneja ,in his speech gave us a peek into his vision for the school.
Presenting the Annual Report, the Principal, Ms. Ruchi Pradhan Datta crisply encapsulated the
salient events and results of the past two years in both scholastic and co – scholastic areas and
highlighted the all round achievements of the school. She also shared her vision for the future.
Speaking on this special occasion the chief guest thanked the management for inviting her on this
occasion that also gave her a chance to visit her home town. While addressing the students, she
asked them if they were facing the stress of knowing what they wanted to become. She herself
answered this question and advised them to try and find out who they wanted to be. She advised
them to focus on ‘who’ instead of ‘what’ and urged them to become compassionate human
beings. She ended her speech with a few lines from a poem by Amrita Pritam –
“APNE GHAR KA NUMBER MITAYA HAI
AUR GALI KE MATHE PER LAGA
GALI KA NAAM HATAYA HAI”
Ms. Priya Malik also graciously released the 23 rd issue of the school magazine ‘Colors’ as well as
the first issue of ‘Reflections’ a collection of short stories by the Asianites.
The President Mr. Amarjeet Singh presented a souvenir and memento to the Chief Guest.
The event planned for the evening included speeches and felicitation of the High Achievers in
academics. This was followed by the felicitation of Capt. Swaran Singh, Director Sports for twenty
two years of his valuable and relentless support.
The variety entertainment programme in the evening began on a musical note with Senior School
choir ‘Milap’- a fusion of Western & Indian Classical Music. The impeccable performance drew a
huge round of applause. It was followed by the melodious Junior School Choir which was a
beautiful rendition of the song ‘Wake Me Up’. The highlight of the evening was ‘Panchtatva’ a

musical adventure filled with magic, representing the five elements which are the essence of all
life.
It was enacted by the students astoundingly well, the stage came alive through the invigorating
dance performances of the talented students and was highly appreciated by the audience.
The function was attended by the Directors, Mr. Gaganjyot Juneja, Ms. Vartika Sah Juneja,
Director Academics, Mr. Anant V.D. Thapliyal, Ms. Simmi Juneja, Head Senior School,Mr. Mukesh
Nangia ,Dy. Head Junior School, Ms. Surabhi Narula, many dignitaries of Uttarakhand , Board of
Governors of The Asian School, parents , students and the entire staff.
The Head Girl, Ms. Sharvangi Bajpai and Vice Head Boy Master Harshwardhan Sati passionately
shared their experiences with some emotional anecdotes and the vote of thanks proposed by the
Vice Head Girl Ms. Aishi Thapliyal brought this wonderful evening to a close.
The programme was jointly compared by Ms. Priyani Sen, Ms. Sadhana Nanda, Ms. Naysa
Thakkar, & Master Lalrinsiama.