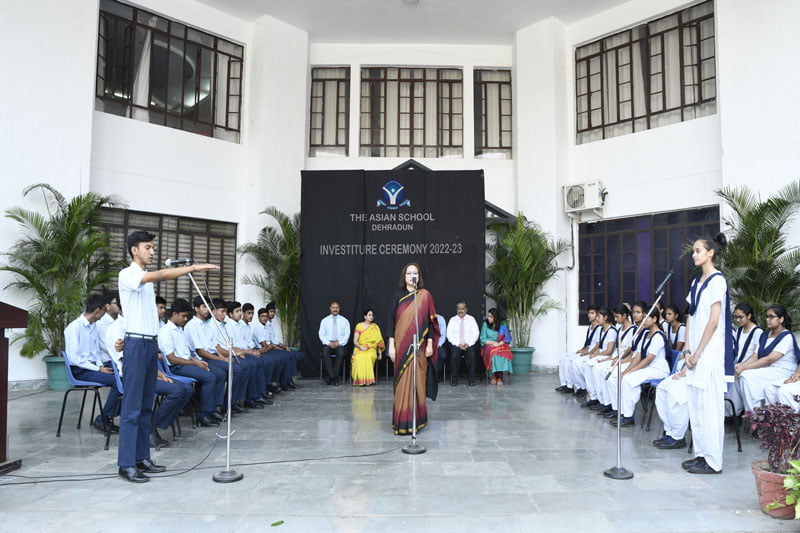 On the 26 April, 2022 the New Prefect Body of The Asian School, Dehradun was invested with duties for academic session 2022-23. A solemn occasion, the ceremony began with the members marching to the stage in sync with mighty serious music that replicated the aura of the ceremony.

To help the students feel the sense of responsibility and keeping with the tradition of the institution its outstanding students were invested with the duties of office bearers. It was a day imbued with a sense of pride, humility and leadership. The proceedings of the function commenced with the spell binding rendition of the song ‘We Shall Overcome’ spreading the belief that each one of us can reach for the stars with determination and perseverance.

It was a solemn ceremony and the Principal invested the new appointees with their position of authority. After receiving the Oath of maintaining fairness in judgment from each of the newly appointed student leaders, the Principal pinned the badges and blessed the members of the Prefect Body. Earlier these students were selected through a well conducted election held in March, 2022.

The Principal Ms. Ruchi Pradhan Datta congratulated the students and wished them luck. She urged them to take up the responsibility with commitment and integrity The ceremony came to a glorious end after the prayer by the Principal and a huge round of applause for the new appointees.

Chat with us
Pay Fees Online